I was born in 1985 in Charlotte, North Carolina.

My mom, an avid sports fan, made sure that I experienced what was then a unique phenomenon: the NBA in Charlotte, which was then a city of roughly 350,000 people.

Remember that this was the 1980s. The decade had been dominated by Larry Bird’s Celtics and Magic Johnson’s Lakers – and Michael Jordan’s Bulls were on the rise and would win their first championship in 1991. The NBA was becoming an international sensation and somehow our little/big Southern city had landed a franchise (the national sports media joked at the time that we could only land McDonald’s franchises).

The team was almost named the “Spirit” but then a name-the-team contest resulted in the name “Hornets.” The popular story behind the nickname has a long history and is as follows, from Beasley and Emerson’s 1875-76 city directory:

The word “Hornets” would find its way into various aspects of the city well before it became associated with sports. For example, this ad from the 1887-88 city directory. 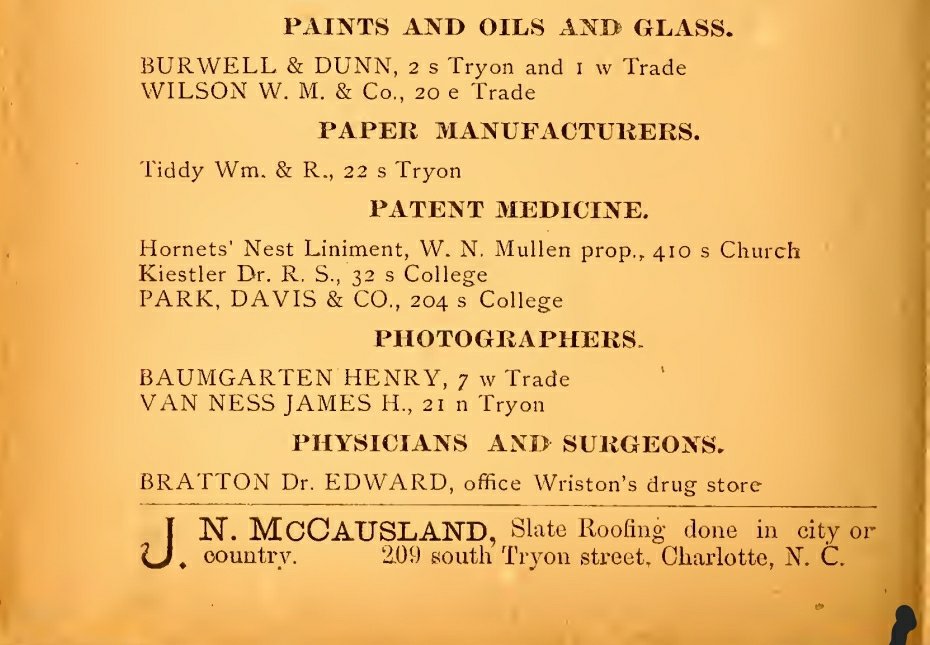 The Charlotte Hornets baseball club, then simply known as “The Charlotte Team,” won 25 consecutive games in 1902, enough to land a front page spread on Sporting Life. “Moonlight” Graham, made famous outside of sports by the movie Field of Dreams, can be seen at the top left corner. And oh yeah, he was from Fayetteville, NC:

The Charlotte Hornets baseball team begins to appear in The Charlotte News in 1911 – and the tradition of using the word “buzz” begins: 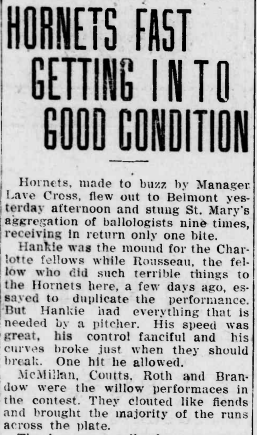 The Hornets name was even taken up by a rag-tag (I’m assuming) team of volleyball-playing Army nurses in Charlotte in 1918: 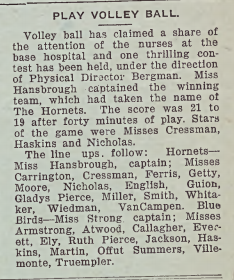 The nickname “Hornets” also served for the athletic squads of Campbell University during the 1920s and 1930s. This excerpt from the 1931 Pine Burr yearbook describes a football game between Boiling Springs and Campbell:

Apparently there was also a “negro” baseball club that played in Charlotte for a time. This ad is from The Carolina Times on 24 March 1940:

The Charlotte Observer recently published a piece about Negro League baseball in Charlotte. In that article, historian Michael Turner Webb remarks that “Pay for the players was slim to none, often coming from a hat being passed around in the stands.”

Webb is apparently working on a book about Negro league ball in the Carolinas. I’ll sure as heck be buying that.

In 1952 the Charlotte Hornets baseball club made headlines in the state. Literally. The headline from The Carolina Times on 20 December 1952 reads:

According to the article:

“The Hornet’s general manager, Phil Howser, disclosed this week that the Negro players will be given a chance to make the team. The first hurdle to be cleared, providing the players make good in Spring training, is the sentiment of some of the clubs of the Tri-State League against using Negro players. There have been some indications of pressure from some of the League’s front offices against such a move as a result of Rock Hill’s experiment with a Negro last summer. The South Carolina club used a Negro for one game and it caused such a flurry that he was not used again during the season. Then there is the matter of ordinances which some member teams’ cities have against using Negroes.

Also the players will not be able to train with the Hornets in Florida because of ‘local complications.’ But, barring all of these obstacles, Howser apparently intends to go through with his plan. Howser affirmed that he was not using the players for ‘publicity purposes.’ ‘The boys are good baseball players and if they are good enough to play for our team, I believe they should be given the chance,’ he explained. He said he bad the support of Clark Griffith, owner of the Washington Senators, parent club of the Hornets.”

Charlotte’s baseball Hornets eventually folded in the early 1970s. The Charlotte O’s (Orioles) would begin play in 1976 and be bought by Charlotte Hornets (NBA) owner George Shinn and renamed the Knights the late 1980s.

Prior to the arrival of the NBA Hornets in 1988, there was one more major evolution in the use of the Hornets name. The upstart World Football League, which only lasted from 1974-75, brought the failing New York Stars to Charlotte. The WFL Hornets played at American Legion Memorial Stadium in uptown. 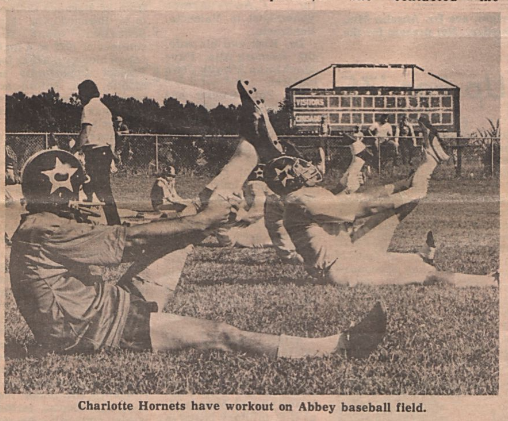 Belmont Abbey College hosted the Charlotte Hornets of the WFL in October 1974 for training but the WFL simply didn’t last. Another attempt at a major professional football league in the United States was the USFL from 1983-85.

Charlotte did not have a USFL franchise. Maybe we’ll get an XFL team if that mistake ever starts up again. I’m fine with the Panthers.

I write this primarily because I’m a nerd who enjoy basketball, research, old newspapers, and history.

My office at the college where I teach is a purple and teal paradise. The Hornets are “my squad.” When I was a high school student I would wear knee-high purple and teal socks on days after the Hornets won. My Chuck Taylors have purple shoelaces.

When the team departed Charlotte for New Orleans in 2002 I was devastated. If you’re wondering how they came to play in Charlotte again, well, that’s complicated. Maybe I’ll address that story another time.

With this post I just wanted to briefly sketch the history of the nickname itself. Funnily enough, Charlotte is named after the wife of King George III yet the city’s NBA franchise is named after rebellion against that same monarch.

The city logo is a crown, after all.